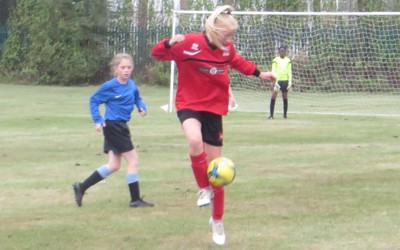 On Monday 23rd September Cheam’s U14 girls played away against Glenthorne in the SSGFL.

After a shaky start Cheam went down 1-0 in the first minute, but Sophie D quickly equalised from a fantastic corner taken by Storm B. Rebecca D made numerous saves, Emma B, Emma A, Becca B and Abi B maintained a strong defence and kept the opposition from taking too many chances. Mia C, with bags of energy, boosted the team, driving the midfielders Millie W, Mae T and Storm up the field where they created plenty of goal scoring opportunities. However, we couldn’t convert the chances and Glenthorne made us pay, scoring their second and third goal with lucky breaks. Cheam fought back. Ella E battled hard during the game having a few chances at goal. At half time it was 3-1 to Glenthorne.

The second half saw Sophie and Mia move position to right and centre backs with some great defensive work, along with Becca and Abi who made some impressive challenges and won the ball back for us several times. Cheam’s second goal came from a great run by Millie who smashed the ball in the top corner, making the final result 3-2. The team played so well and Cheam dominated the play but goals win games.

Player of the Match: Rebecca D