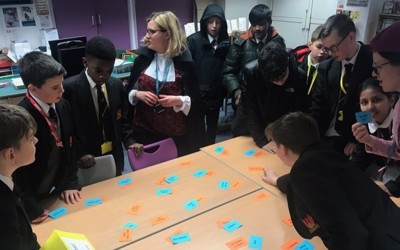 The LRC celebrated World Book Day at lunchtime on Thursday. Students enjoyed playing 'Wolverine', which is similar to Pictionary but with a twist and requires the person drawing to use three pens at once (to replicate Wolverine's 'claws').

There was a chance to show off book knowledge with 'World Book Day Pairs', matching up authors and characters. This became very competitive, especially as correct matches were rewarded with a World Book Day chocolate bar.

A book's cover will usually give you a hint of what it is about, however, it can also put you off choosing it to read.

As part of the LRC's initiative to encourage reading for pleasure, we have made special book covers for some of our fabulous books which might otherwise be overlooked. These special jackets show just the first line of the story, without a picture or illustration to prejudice/influence a student's choice.

We're hoping to encourage our students to be readers for pleasure and to dip in and give these worthy books a try.