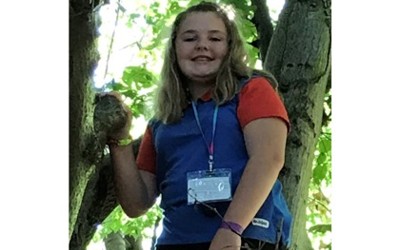 Congratulations to Anna J, as a guide with 1st Cheam Park Farm Guides, Anna has been awarded a Jack Petchey Foundation Award for her contribution to Girl Guides.

This was her nomination:
“Anna began her guiding journey as a Rainbow aged five. She then moved up to Brownies followed by Guides.
Anna is both a Rainbow and Brownie Helper and her Thursday nights consist of guiding from 5 - 9pm (when we’re face to face) - Rainbows, Brownies and then attending Guides herself. Anna is also undertaking her Young Leader Qualifications.
Anna is always helpful, calm and is a pleasure to have at the meetings and the young ladies adore her. She helps with running games and activities and is an extremely good role model. She has participated in many guide celebrations such as Big Brownie Birthday and Heyswood Birthday Weekend. Anna also encourages and participates in many of the units fundraising events.
During lockdown Anna has continued her role as Helper to participate in zoom meetings and activities and as a Princess Diana Award Ambassador (school) has run an anti bullying session for both Rainbows and Brownies via zoom. She planned age appropriate activities for the session and the girls were engaged and enthusiastic about the session.
Anna is an asset to Girl-guiding and hopes to continue on her journey in the future.”

What a fantastic achievement – well done Anna for all your hard work.