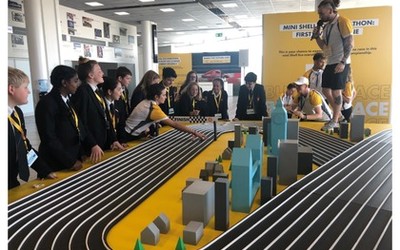 On Monday 1st July, I was one of a few who were invited to Mercedes Benz World in Weybridge to a special event that was run by Shell, named “Make the Future Live.” It was about how to make the world a friendlier and cleaner place for generations to come. We looked at sustainability and attended talks by Shell experts and people from other global companies.

To begin with, we attended a big assembly. All the people that spoke showed a childhood image before explaining to us how they came from that stage in their life to where they are now. Firstly, we heard from a chemical engineer who worked in the company Lush. She told us about how their company made products and how they were trying to make them environmentally friendly. Secondly, we heard from a flight engineer. This man told us that he tested aeroplane engines and worked for the famous engine manufacturers Rolls Royce. He told us about all of the interesting safety tests that they carried out on plane engines to make sure they are robust enough, including shooting projectiles into an engine. Lastly, we heard from a fuel engineer who worked for Shell. He told us that he tested additives in the fuel to make the pollutants more eco-friendly.

After this, we had a really fun task planned for us. We had the opportunity to make a car powered by salt water! We learnt that salt water and metal react to produce electricity. We placed a piece of metal into the car and let it react with salt water and connected it to the metal disk where two wires passed electricity to the wheels. We then raced the cars and had a lot of fun doing this. Next we did some reverse engineering. We examined a car, motor, helmet and suit before deciding how we would make them better.

To end the day we attended an exciting workshop in which we had to make up a way in which we can help the environment by 2050. We had to decide what parts of the changing environment we could help with and how to do this. We came up with many ideas and found out that we can take part in a competition for this.

This was a great day for all of us!