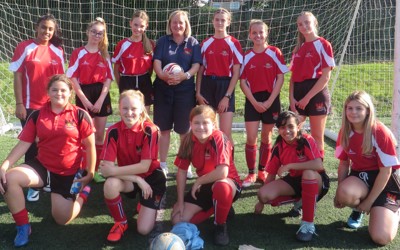 On Thursday 19th September Cheam played Greenshaw at home for their first game of the year in the SSGFL.

Cheam started slowly, letting Greenshaw have shots at goal, but they were stopped by Cheam’s sub goal keeper Emma B. In the 18th minute a strong reaction from Cheam saw Amber H scoring the first goal, assisted by Ellie S and Megan B. In the 19th minute Megan run down the pitch and scored an amazing goal in the left top hand corner of the net. The half time score was 2-0 to Cheam.

The second half saw the first appearance off Nairh S playing on the left. Cheam’s defence Eshal T, Ellie, Mollie C and Mia K had a fantastic game keeping Greenshaw out of the goal area and passing the ball out to the wingers Storm B and Georgia S. Before the final whistle Holly B took a throw in from the right hand side to Megan who chested it down to her feet and struck the football in to the back of the net leaving the final result 3-0 to Cheam.

Player of the Match: Ellie S