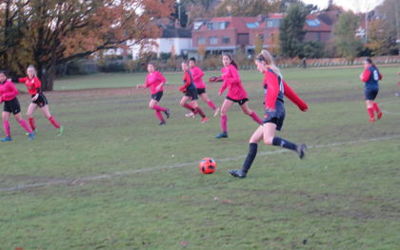 We started very strongly with a good cross by Roxie F to Megan B who scored with a strike outside the area into the left hand corner of the goal. Then there were a few chances from Mollie C, Holly B and Storm E-B which didn’t make the back of the net. In the 15th minute Cheam had a goal kick and it landed by Keira Y on the right, who then dribbled the ball around their defence to score. Within minutes of the half time whistle Mollie made a break through and crossed the ball to Megan who then belted it in the net making it 3-0.

There were a few changes in the second half when Lola S and Amelia L gave way to Nairah S and Eshal T. In the fifth minute of the second half they scored their first goal and shortly afterwards Ellie S passed the ball over to Amber H, who struck the ball and their goalkeeper didn’t have a chance to save it as it went into the top left hand corner. Mia K overpowered their player and they received a free kick. Cheam’s defence Ellie, Mia, Eshal and Nairah kept strong and defended the ball well. Ursuline seemed to find strength and kept Cheam’s Goalkeeper Georgia S very busy, but unfortunately in the 20th minute they broke through our defence and got their second goal, closely followed by a third. Cheam did not give up and kept pushing for a goal, pressurising their keeper until Keira received the ball. She ran half the pitch to kick the ball into the back of the net making the final score 5-3. A brilliant performance from the girls.

This is the first time in nine years that Cheam has beaten Ursuline after winning the Surrey Cup in 2009!

Players of the Match: Mollie and Storm