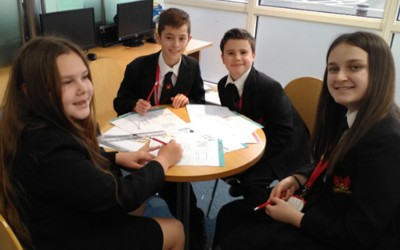 Earlier this month, we took four of our Maths Ambassadors to compete in the National Young Mathematicians’ Awards in partnership with NRICH. They competed against three local secondary schools at Explore Learning’s centre in Ewell. Our students were tasked with working collaboratively on two mathematical problems which they had to complete within an hour.

The first task limited our students to use only a certain number of matchsticks to create symmetrical U-shapes; one which had an even area and one which had an odd area. For both tasks, the only resources available were: matchsticks, squared paper and the task sheet. Our ambassadors had to work as a team to understand the tasks and collaboratively find solutions. At first, they used a rectangle to gain perspective on the problem, as they knew a rectangle is symmetrical – then soon realised they could make a U-shape by cutting a certain area from the rectangle. This then led them to create their first symmetrical U-shape with an even area using the required number of matchsticks. From this point on, they each had an understanding of the problem and were all able to contribute ideas to then find a U-shape with an odd area.

This momentum and enthusiasm carried on to the second task, which was a lot more open-ended. Our ambassadors were required to create as many U-shapes with an area of 14 units squared. Since this task did not have one answer – our ambassadors tried to generalise the problem, building on the understanding developed in task 1. Using techniques learnt in their Maths lessons at CHS, they were able to use one solution to form many others – using the idea of re-allocating. It was brilliant to see our ambassadors really understand the task, to the point where they were able to apply techniques learnt in class to a completely different problem.

Throughout the day – our students were by far the most enthusiastic and in the process, impressing the staff at Explore Learning. We now wait to hear whether or not they have made the Grand Final which takes place in February. They seemed to have enjoyed it too - with comments such as “that was so much fun”, “are we going to do this in class?” and relentlessly asking “when do we know if we have made the final!?” The students involved were excellent ambassadors for our school and we are extremely proud of the way they conducted themselves.