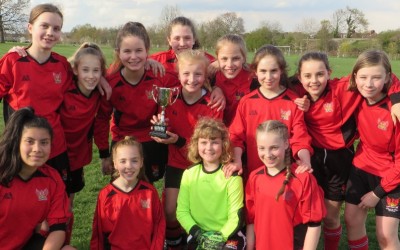 On Wednesday 3rd April the U12 Girls football team played against Glenthorne in the Sutton Cup Final.

Cheam got off to an excellent start. Within minutes, Mia had a throw and the ball landed in the goal area for Millie to take on their keeper with a strike which sailed into the top right hand corner of the net. Cheam had a good defensive team with Rebecca in goal, Anja, Becca, Emma and Abi, the back four who controlled the game throughout. In the 18th minute Mae was fouled; Mia took a long range free kick which went over their defence and the goalkeeper’s head to score a magnificent goal. Just before half time Mae, Anja gave way for Ella and Josephine and Sophie R came on for injured Becca. The half time score was 2-0 to Cheam.

At the start of the second half Abi swapped with Sophie L in the midfield. Cheam were playing downhill and with Georgie and Mia putting the pressure on, Cheam had the majority of the possession.  When Glenthorne had a chance to attack, Rebecca was ready and waiting to protect her goal. Halfway through the second half Mia took a corner and the ball landed on the penalty spot for Emma to head in the goal making it 3-0.  Just minutes before the final whistle Cheam had a throw and Mia hurled the ball to Millie who then smashed it over their keeper’s head making the final score 4-0 and a well-deserved victory. Well done to all the U12s for winning the Sutton Cup - the first time for this age group.

Player of the Match: Millie