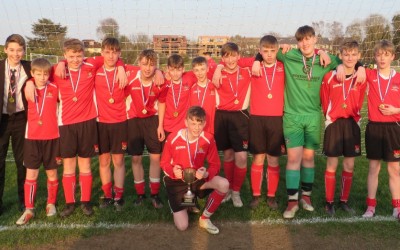 The first goal came from a Cheam corner which caused a scramble in the box with Sutton Grammar unable to clear the ball, eventually Charlie S poked the ball into the back of the net to make it 1-0. The match was end to end and Sutton Grammar had multiple chances to draw the match level, but some great defending from the Cheam defence kept them out.

In the second half, Louis D calmly slotted into the back of the net to make it 2-0, after a great attacking team play which put Cheam firmly in control. The midfield worked relentlessly throughout the match, working up and down the pitch, putting a real shift in. Cheam maintained their grip on the match and showed great confidence on the ball in the closing minutes of the match.

On the full time whistle, the boys were exhausted from their hard work but ecstatic with their first silverware in three seasons! The boys played fantastically
well throughout their cup run, beating tough opponents Carshalton Boys in the quarter final 3-1 with goals from Louis D and Rio G (2) and then going on to beat Glenthorne, another tough opponent, 5-1 in the semi-final. Three goals from Louis D, an own goal and even a goal scored directly from the goalkeeper Adam L secured the win!

The Year 9 boys have also had a good season in the league, winning all but one of their matches, only just losing the match against Carshalton Boys in the final seconds of the match. The team will continue to grow into an even stronger squad next season and hopefully this is the first trophy of many!