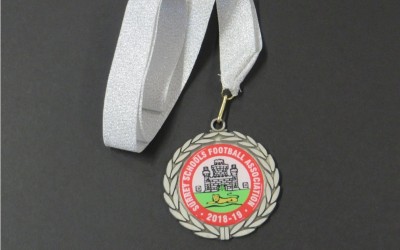 The U16 Girls played their best game so far this season against Blenheim in the Surrey Cup final on Wednesday 1st May at Leatherhead Youth FC.

From kick off, both teams started evenly with counter attacks from both sides. Cheam showed their strength when they started to take control of the game, by passing, supporting and communicating.  Angel (Cap) held the centre midfield together with Amber, Keira and Louise who were running up and down the wings, supported by Megan and Roxie on their respective sides. In the 20th minute Roxie got the first goal of the game with a through ball from Megan to have a great strike into the back of the net. Ellie and Gemma had a number of good challenges in the heart of defence. A mixture of fine saves from Brooke and some outrageous misses from our opponents kept the score respectable, at 1-0 to Cheam at half time.

Cheam continued to graft and battle in the second half and started to look a lot more threatening in attack but despite this Blenheim continued to apply pressure and punished the mistakes which Cheam made. In the 55th Minute Cheam were looking tired and Blenheim took the advantage by scoring three well taken goals.  With Cheam 1-3 down, Blenheim thought they had done enough to take the win. However the girls had different ideas!  They continued to work and pass the ball effectively and in the 70th minute Mia passed the ball down the right to Roxie who had a long range shot, which then resulted in her scoring her second goal. Unfortunately there wasn’t enough time for us to equalise.

Well done to all the girls.

It was a fantastic game to watch and receiving a silver medal out of all the Surrey schools is a fabulous achievement.

Player of the Match: Brooke

Email Received from a Supporter:

‘To be honest Cheam were the best team for the large parts of the game.
A wonderful performance from all.’