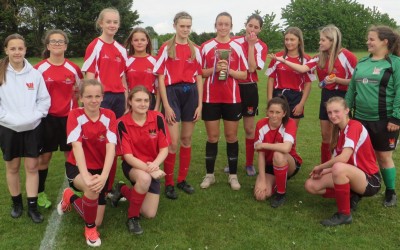 On Friday 10th May Cheam Under 16 Girls played against Greenshaw in the Sutton Cup final at Nescot playing fields.

Cheam started slowly, however, once they started to pass the ball around and felt the grass under their feet the girls played some fantastic football. Defenders Sophie, Amy P, Mia and Ellie challenged the opposition who never really got into the game. Our first goal came from a corner drilled in the box by Roxie which caused a scramble to the ball. Luckily Amber tapped it in! The second goal came shortly afterwards with a fantastic strike from Angel from the half way line.  At Half time the score was 2-0 to Cheam.

Cheam scored eight more goals in the second half!  Amelia, Louise and Kiah all played their part in achieving the final score. And we mustn’t forget Brooke who made a great save, keeping a clean sheet.   The final score was an incredible 10-0!  What a great performance girls.

Players of the Match: Angel and Megan