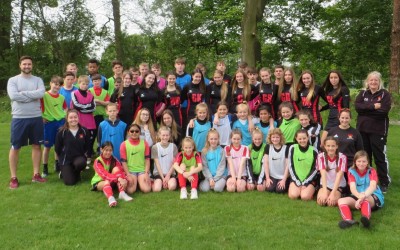 On Friday 17th May, 46 students travelled to PGL Liddington for an Activity/Netball Tournament weekend. Students were able to enjoy a variety of PGL activities including zip wire, abseiling, vertical challenge, aeroball, archery and expert football coaching.

Over the weekend, the netball girls played in a tournament organised by PGL involving 11 other teams from all across the UK.

The girls flew through the qualifying and ended up going through to the semi-finals with a +79 goal difference! The semi-final was a well-fought battle with a convincing 10-3 win to Cheam. Cheam started to feel the pressure as the final approached, but as play started, they got into their groove with the shooters getting their shots on target. At half time, Cheam were winning 6-2. The second half was very nerve wracking for everyone, including some of the boys who had come to support our team. Goals were being exchanged at either end, and a shot went in for the other team on the final whistle… But Cheam were the WINNERS! The final score was 10-7.

Players of the tournament: Bella C and Ellie S

Well done to all the girls.  It was a fantastic game to watch and receiving a gold medal is a fabulous achievement.  The girls were a credit to Cheam with their sportsmanship, enthusiasm and conduct throughout the weekend.

The Year 7 Girls and Year 8/9 Boy’s football squads had a fun filled weekend. They took part in morning football coaching sessions and demonstrated a very high standard of ability which impressed the coaches. They also took part in climbing activities such as Jacob’s ladder and the trapeze which involved the students taking a leap of faith. Some of the students did very well to conquer their fear of heights. To cap the weekend off, they took part in a raft building activity using barrels and rope. They began very well and were able to use their oars to navigate around the lake, but soon after the students started to take the plunge into the water one by one. The students enjoyed this task very much and are sure to have created some lasting memories of their weekend at PGL Liddington.

Mrs O’Connor, Miss Quigley, Miss Bishop, Mr Lyle and Mr Martin would like to thank the students for a really enjoyable weekend.