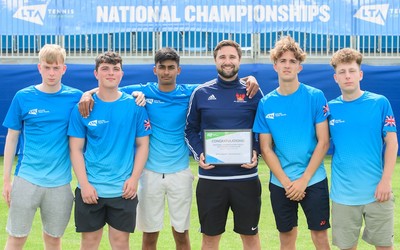 Cheam High School participated in the Team Tennis Schools National Championships hosted by the Nottingham Tennis Centre on Tuesday 9th to Friday 12th July 2019. Cheam High were seeded fourth and were one of only two state schools competing in the Boys Glanville Cup, which is mainly made up of independent schools from across the country. In round one, Cheam were drawn against local neighbours Ewell Castle. The boys started the Championships strongly, winning all four singles matches without dropping a set. Vraj Patel, Christian Doel, Robert Beznea and Zak Pacey played fantastic tennis to win their matches comfortably.

On day two, Cheam were drawn against Bournemouth Collegiate in the quarter-finals, who had a very strong team including the number one seed who played in the Boys’ Singles at Wimbledon this year. Vraj Patel put up a good fight in his match against the number one seed, but succumbed to a defeat against a highly skilled opponent. However, the Cheam boys won their other singles matches that were all decided by intense tiebreaks, taking the match into doubles. Robert Beznea and Zak Pacey paired up and played some excellent tennis in the second set that led to another tiebreak, with the boys eventually defeating their opponents in a close encounter.

Cheam were drawn against number one seeds Merchiston Castle from Edinburgh in the semi-finals, who had won their previous rounds with ease. Zak and Robert took both of their matches to further tiebreaks in the competition, but the boys narrowly lost in a display of excellent tennis from both teams. Vraj and Christian had tough opponents to face, with both matches played to a high standard and intensity. Unfortunately, the Merchiston boys played consistently well throughout and went on to win both matches. Merchiston progressed and eventually won the entire competition, so the Cheam boys did very well to compete against this year’s champion.

On the final day, the boys competed in the third place play-off match against second seeds Millfield School. Jools Freeman stepped in at fourth seed but came up against a difficult opponent, whilst Robert and Zak also had tricky opponents to play. Millfield went on to win all three singles matches due to the strength and depth of their squad, although the Cheam boys did put up a good fight. Vraj Patel played some fantastic tennis to win the first set in his match but he was pegged back in the second, the match being settled by a final tiebreak that led to Millfield winning the contest, beating Cheam to third place.

Overall, fourth place was a great result for Cheam High School who were competing in a tournament involving the best school tennis players in the country.  All five boys can be very proud of this achievement. The boys were incredible ambassadors for the school and had a great week in Nottingham at the Team Tennis Schools National Championships.