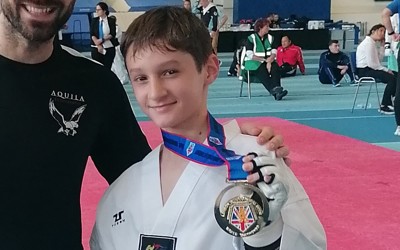 Congratulations to Martin Mindov, Year 9, for his recent achievements in Taekwondo. At the beginning of the month Martin travelled all the way to Motherwell to compete in the 2019 Scottish International Open Championship where he won his first gold medal in traditional taekwondo.

Last weekend he attended the Universal Taekwondo Federation London International Open in London where he also achieved a gold medal.

Martin trains really hard several times a week and spends most of his weekends travelling to various destinations.

His dedication to his sport is really paying off.  Well done Martin!