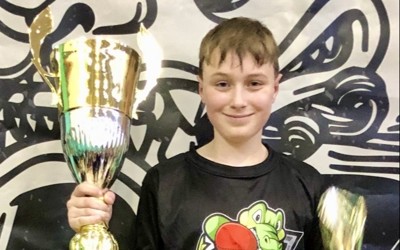 Congratulations to Mateusz S, Year 9, for his amazing achievements in kickboxing.

He only took up the sport two and a half years ago, but trains four to five times per week with Absolute Martial Arts and already his hard work has paid off. He has won lots of medals and trophies.

Last weekend Mateusz competed in the third leg of a three series tournament, the Lordswood Combat Tri-Series in Birmingham.

Three competitions are held throughout the year, with competitors earning points for podium places. The fighter with the most points after all three events becomes Grand Champion of the Year.

Mateusz fought brilliantly and as a result won the overall competition and the title of Grand Champion.

Well done and we look forward to hearing of future successes.