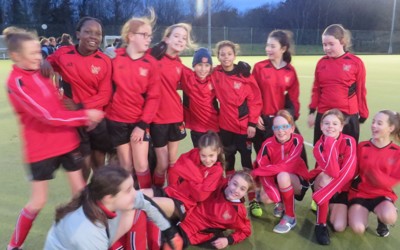 On Monday 13th January the U12 Girls played at home against Nonsuch in the SSGFL.

Cheam started off really well, shutting down Nonsuch’s attacking play. Our Goalkeeper Izzy H dived and saved several shots at goal, keeping the opposition away, with help from the defence Ibi O, Lily S and Darcey S. The midfield had a good passing game with Lucy P and Tiarna A passing the ball out to Chloe D and Imogen K who had attempts at goal - but we didn’t manage to score.

In the second half, Cheam’s formation changed and the girls stayed strong, making sure Nonsuch didn’t concede a goal. Georgia D had a couple of shots at goal but narrowly missed - one shot just hitting the post. Cheam didn’t give up. They continued to battle, making the opposition work hard and the final score was 0-0.

Thanks go to Amber H who managed the team while Ms O’Connor refereed the game.

Players of the Match: Chloe D and Lily S