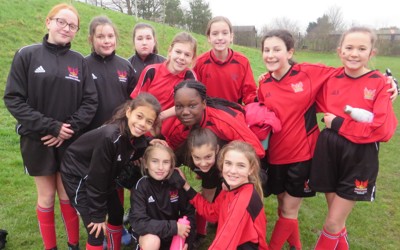 Cheam opened the scoring within eight minutes as Imogen on the right crossed the ball to Lucy who then tapped it to Chloe to smash an unstoppable shot from the edge of the area. Within five minutes Oaks Park’s striker equalised. Although Cheam’s goalkeeper Izzy got her hand to the ball, the strike was too powerful for her to save. In the 18th minute Lucy received the ball from Chloe and scored a spectacular goal from an angle in the box. After the goal, Oaks
Park took the centre kick. Imogen dashed into the circle, got to the ball and lopped
it over to Tiarna who had a great run through the opposition’s midfield and defence to score. At half time it was 3-1 to Cheam.

At the start of the second half there was a few changes with Georgia, Maddie, Ani replacing Darcey, Lily M and Lily S but the formation stayed the same. Cheam were the better side taking shots at every opportunity. In the 20th minute Oaks Park woke up and started fighting for possession at every chance. This caused Cheam to lose their focus and allow Oaks to score not just one but two goals to equalise at 3-3.

The score remained the same after extra time and so there was the dreaded penalty shoot-out.

It was 3-3 after five shots each, but after the sixth Cheam’s shot was saved and Oaks Park scored theirs. The match ended 4-3 to Oaks Park. Unlucky girls, you all played well!

Player of the Match: Tiarna