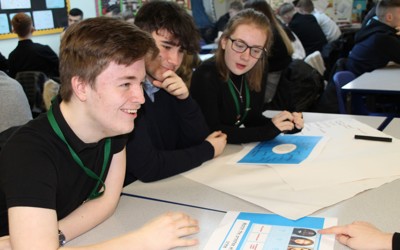 Friday 7th February 2020 saw Cheam High School’s annual Sixth Former For A Day. All Year 11, 12 and 13 lessons were suspended on the day to give the Year 11 students the opportunity to experience a day in the life of a Cheam High Sixth Former.

The day started with a Sixth Former For A Day assembly followed by five taster sessions which students had previously selected. In their sessions students could be found participating in a range of activities, including dissecting fish in Biology, taking photos around the school in Photography and baking fruit tarts in Food Science.

In addition to their taster sessions the Year 11’s were able to make full use of the Sixth Form facilities during break and lunchtime. In the Social Zone at lunchtime there was a quiz, with prizes being awarded to the winners as well as those students who conducted themselves admirably on the day.

A huge well done and thank-you to all Year 11 students for being so fantastic on the day and to all of the staff who made the day such a success!