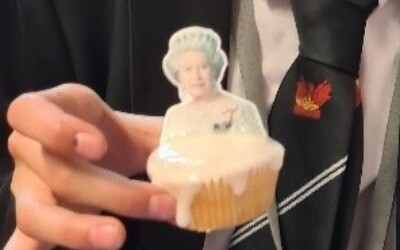 The Library has been a hive of activity all week as students have thrown themselves into the Jubilee spirit with a spot of cake decorating, royal fashion designing, games and more.
Our Name the Corgi Competition received a lot of entries – half of them were for ‘Queenie’; the other half wanted to name the corgi after themselves! We did have some inspired suggestions too, including the winning entry ‘Windsor’ as suggested by Charlotte C in Year 7 who has won herself a prize. Well done Charlotte!
We’ve also launched a new writing competition this week for writing with a royal theme (details below).  The deadline for entries is Monday 6th June.  Please encourage your child to put pen to paper over half term, especially if you would like to give our fluffy corgi a good home!
Jubilee Writing Competition
Submit a piece of writing with a royal theme. It could be anything: a letter, diary entry, poem, short story, newspaper report… it’s your child’s choice.
Best entry will win a fluffy Corgi!
Runners up prizes too.
Some writing suggestions:
If I were king or queen for a day
Diary entry of a royal Corgi
A jubilee acrostic poem
Newspaper report about a royal break-in
Short story entitled ‘An upset at the royal garden party’
A letter to the Queen
Entries to be dropped off in the Library by Monday 6th June.